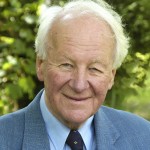 The author of over fifty books on the Christian faith and former Rector of All Souls’, Langham Place, John Stott came to live at the College in 2007. He received many visitors from around the world whose lives he had touched during a truly international ministry. He was founder-director of the London Contemporary Institute for Christian Theology of which he became President in 1986 until his retirement in 1991.

It was the privilege of the College of St Barnabas to be John’s home for the last four years of his earthly life.... Read more